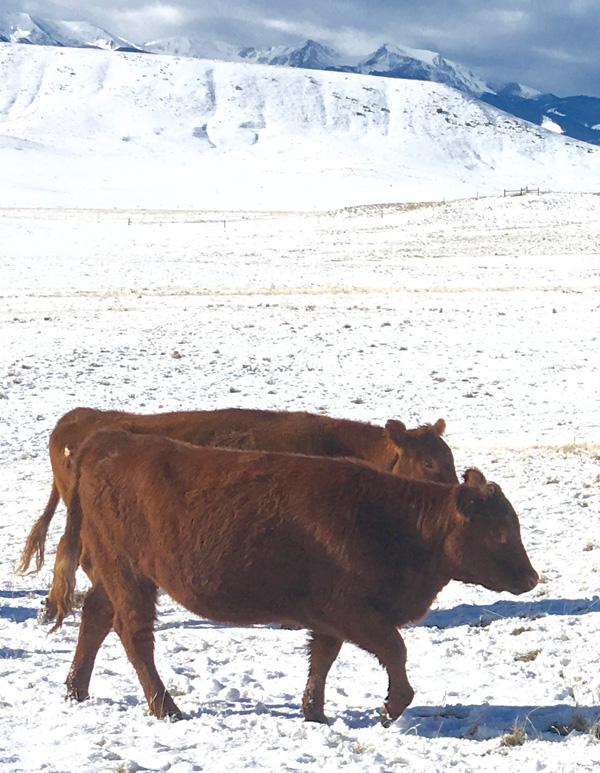 Montana Red Devon was started under the name Sabo Ranch, with a single Devon bull and 20 Red Angus heifers in 1997.  24 years later, our work with fertile, hardy, well proportioned Devons continues, and we maintain a breeding herd of 40 carefully selected Red Devon cows.   We also run 20-40 head of commercial black and red Angus, covering them with a Devon bull for our grassfed beef program.  This allows us to continually measure our Devons against a much larger commercial gene pool, and to select only those purebred Devons for breeding stock whose fertility, conformation, and mothering provide us and our buyers with the very best of the breed.

We have sold Devons from northern Alberta to Nevada and southern Utah, and have found that they thrive in all those varied and challenging environments.  We manage our 100% grassfed Devons as organically as possible, seeking to improve soils, rather than to treat weeds, and seeking to improve the herd’s adaptive health rather than resorting to antibiotics.  Our Devons are run like the thousands of commercial cattle that surround us here in southwest Montana.  A 45 day breeding season, once-a-day calving checks, breeding yearling heifers in the same timeframe as the adult cows (rather than extra time between calving and introduction of bulls for the year)— all these techniques quickly demonstrate which heifers will be good, fertile mother cows for the future.

Our calves are weaned at 9 months, and thereafter the bull calves join the adult bulls, learning manners and hierarchy so that they develop naturally without extra feed regimens.  We have routinely found that even yearling bulls perform well in breeding, and have developed stamina and hardiness that corral-fed bulls lack.  Heifers are separated from their mothers at weaning, and the female herd is combined again post calving for the rest of the heifers’ lives (with the exception of breeding season where we often separate heifers to a different bull).  Heifers also calve alongside adult cows, learning a great deal of mothering from their mothers and aunts!

Montana Red Devon focuses on Devons that last- as the prettiest cow is only as useful as her next pregnancy and calf.  Hardiness and longevity are our constant goals.  Our cattle are all run with electric fence, herding dogs, plenty of visitors young and old, and are selected for docility and cooperation.

Montana Red Devon offers purebred Devon bulls, females of different ages, and semen from 5 different New Zealand and Australian Devon studs (Te Maewa Oban(NZ), Tapuwae 912(NZ),  Tapuwae 143(NZ), Vix Jurasic (AUS) and Gowan Ross Gentleman(AUS).  We also have a few Devon influence females for sale each year, and sell grassfed beef year round.  Our Devon beef can be found at the ranch, and at the Bozeman Community CoOp in the fall, and at Bozeman's Daniels Gourmet Meats and Sausage.